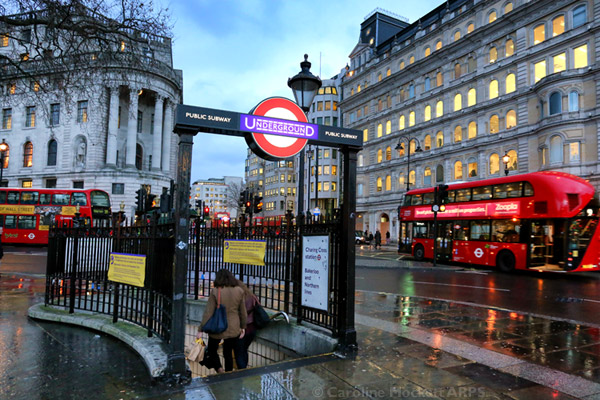 Title: Going Underground
Location: Trafalgar Square, London
Camera: Canon EOS 5D MkIII / 17-40mm EF f/4 L USM
Notes: Today I finally made start a project which has been on my To Do List for literally years – stop at all the stations on the London Underground network, and photograph them Underground and Overground. On the list for today’s excursion was the Bakerloo Line. I caught a train to the furthest station – Harrow & Wealdstone – and made my way back towards the city.  Some stations were interesting, others less so, but it was a great experience spotting little details that you often miss while passing quickly through on your way somewhere else. I managed 24 stations in 4½ hours, but I’d started later than I had hoped, so I arrived in central London around dusk. I also had the full gamut of weather (sometimes in the space of just a few miniutes!) between glorious sunshine and lashing rain. The latter had made the streets around Trafalgar Square shiny and reflective when I came up for air at Charing Cross. The only station I didn’t manage to visit today was Embankment which is currently non-stop for the Bakerloo Line until mid-October due to escalator works. I’m hoping to make this Underground Overground a regular feature during the year.
Today’s Selfie: Day #13
One Year Ago: Day #1840
Two Years Ago: Day #1474
Three Years Ago: Day #1109
Four Years Ago: Day #744
Five Years Ago: Day #379
Six Years Ago: Day #13