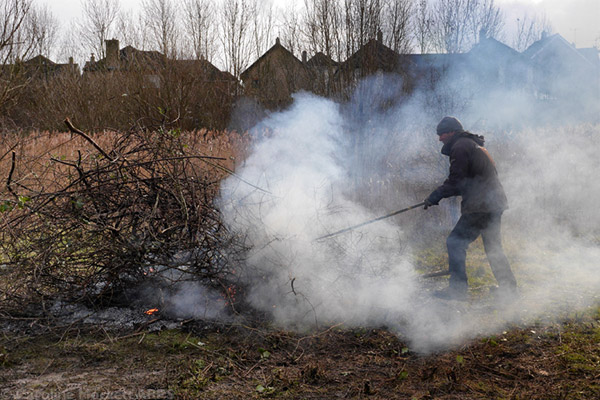 Title: Bonfire Man
Location: South Woodham Ferrers, Essex
Camera: Panasonic Lumix GH3 / Panasonic 12-35mm f/2.8 Lumix G X Vario ASPH Power OIS
Notes: From time to time, the geocaching community holds a Cache In Trash Out (CITO) Event locally where a group of us get together to pick litter, tidy the environment and generally help out for a few hours at a Nature Reserve or similar. Today’s Valentine’s Day do was in South Woodham Ferrers (or Stout Wooden Ferrets, as I prefer to call it). I did lots of litter picking – I even found a discarded hanging basket and the top part of a street lamp which had been dumped in some bushes – as well as bringing back a bin liner full of the usual cans, bottles and rubbish. Several other people helped the park rangers cut back some Blackthorn bushes and burn them. Here’s Rob the Ranger trying to keep the conflagration under control! He had also made a delicious cake to feed us to say thanks, and they brewed tea over camping stoves. Of course, once the hard work was done, we might have gone and found some more tupperware in the bushes – and why not?
One Year Ago: Day #2602
Two Years Ago: Day #2237
Three Years Ago: Day #1872
Four Years Ago: Day #1506
Five Years Ago: Day #1141
Six Years Ago: Day #776
Seven Years Ago: Day #411
Eight Years Ago: Day #45