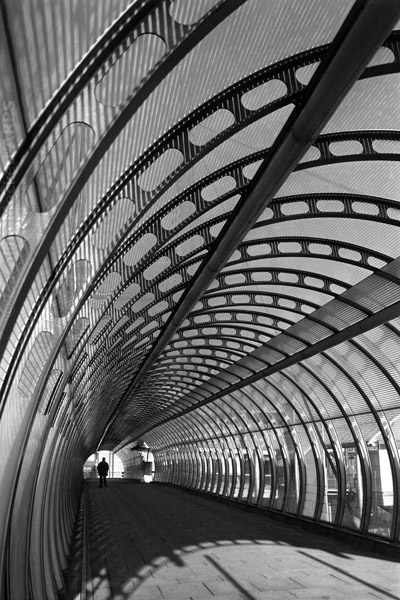 Title: The Time Tunnel
Location: Poplar Station, Docklands
Camera: Canon EOS 100 / Vivitar 19-35mm EF
Film: Ilford FP4 125
Notes: Another trip to London’s Docklands, this time to Poplar at the beginning of 1998. This is the bridge across the A13 at Poplar DLR. I composed the shot and then waited patiently until a suitable figure walked into view at the end of the tunnel. This is one of my favourite shots from my 1999 ARPS panel. 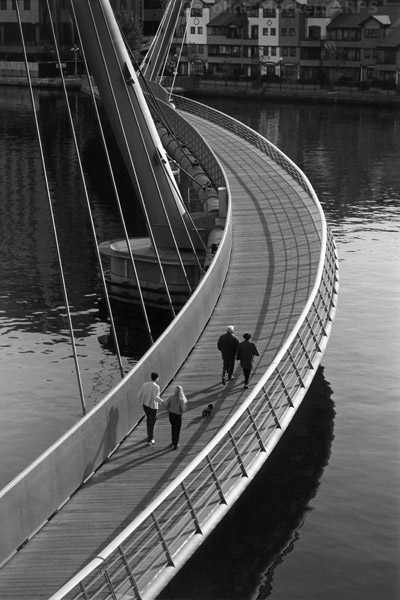 Title: South Quay Footbridge
Location: South Quay, Docklands
Camera: Canon EOS 100 / Canon 75-300mm EF
Film: Ilford FP4 125
Notes: There used to be this wonderful footbridge at South Quay in Docklands. It had a marvellous S-curve as it snaked its way across the water to the other side. The people add an extra dimension to the picture, they are placed in a dominant position on the bridge and lead the eye into the frame. This view was taken from the stairs leading up to South Quay DLR station – which has now been boxed in. It doesn’t matter though, because when the Jubliee Line extension via Docklands was built, they filled in half of this quay and chopped the bridge up. So, another image which cannot be repeated now. I’m glad I saw it in its heyday in 1997. It helped me gain my ARPS in 1999, so I definitely have fond memories of it. 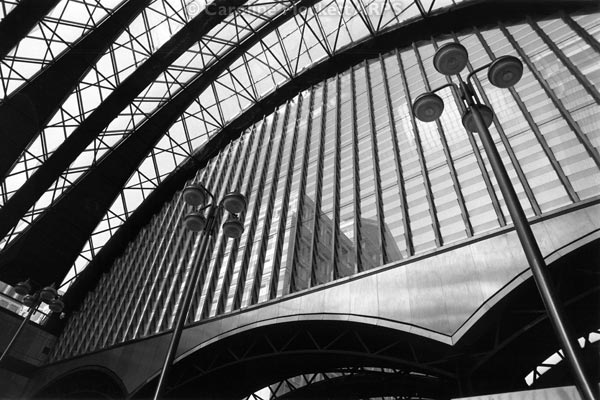 Title: Vaulted Roof
Location: Canary Wharf DLR Station, Docklands
Camera: Canon EOS 100 / Vivitar 19-35mm EF
Film: Ilford FP4 125
Notes: The roof structure at Canary Wharf station on the DLR has often fascinated me. I wanted to show the patterns in the canopy and lighting in an abstract manner. The low viewpoint and wide angle lens have helped to exaggerate the perspective of the curves. Another which helped me gain my ARPS in 1999, so I definitely have fond memories of it. 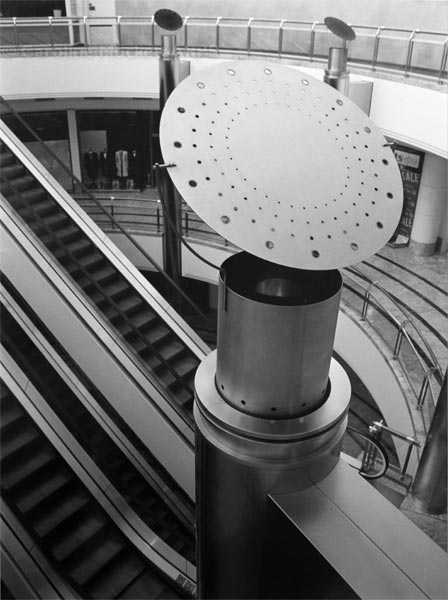 Title: Vent Tops
Location: Canary Wharf Shopping Centre, Docklands
Camera: Canon EOS 100 / Vivitar 19-35mm EF
Film: Ilford FP4 125
Notes: The tops of these vents made a striking subject for a picture, with the background pair echoing the larger foreground example. The diagonal formed by the escalator leads the eye in towards the main subject. Yet another which helped me gain my ARPS in 1999, so I definitely have fond memories of it.

A showcase of some of my early images