I hope I didn’t come across as arrogant in yesterday’s post about how much difference a good piece of equipment can make. That wasn’t my intention. But further reflection set me thinking that, in these days where consumers expect instant gratification from their purchases, I think it’s sad that some people spend an awful lot of money on the best camera and are then disappointed with the pictures they take with it.

People seem far less willing to learn the art and craft of photography in order to get the best results. Of course I’m generalising here, but there has been a gradual decline in membership of photographic clubs throughout the country, even with the huge rise in the number of people buying cameras. I’m a B Panel Judge for the East Anglian Federation, part of the Photographic Alliance of Great Britain. I visit clubs around north London and south east Essex to judge competitions regularly, and their committees are constantly striving to attract new members. Somehow only a trickle seem to be coming through the doors.

A few clubs (and the number is decreasing) have actively shunned the Digital Revolution; it won’t be long before they go under. Some have allowed digital but to be judged in a separate category (and I think, why segregate? It’s the end result that counts and matters to me as a judge, not the technology used to produce it).

Some argue that digital is “easier” than traditional “wet” processes. Usually those who haven’t tried it, I find. And as a judge, I’ve seen just as many badly-done digital prints (if not more) than traditional. In fact, I’d argue that it’s actually easier to make a bad digital print than a bad darkroom one – far less effort is required. Plus, you don’t end up smelling of chemicals or emerging from the darkroom like a confused mole! As ever, the skill is in the execution of what you’re doing, not how.

The vast majority of the clubs I visit have embraced digital photography wholeheartedly (without prejudice to those still using film). So much so that at a few, I don’t see any darkroom prints any more. I can tell, if I look hard enough (and it would require an even lenghtier post for me to explain how). I’ve seen some really stunning inkjet prints, not just from a technical perspective, but from an artistic one. Again, it’s all about who’s behind the camera more than the name badge on the front.

Our equipment can and should be used to facilitate the expression of our artistic talents, and not as a points-scoring exercise to see who’s got the best kit. (Again, I usually find those misguided enough to indulge in this kind of behaviour are invariably those who can’t take a decent picture for toffee).

If you read my recent post, Green-Eyed Monster, you might be thinking that I advocate getting the latest gadgets just for the sake of it. And while I think you should always buy the best model you can afford (whether that be a mobile, digital camera or toaster), it’s certainly doesn’t follow that you will only get the best results from the best kit.

As a known photographer amongst my friends, I’m quite often asked for my opinions on this or that camera. Thy cry goes up “I want to take great pictures, what camera should I buy?” And often I want to reply, “Go buy a decent book on composition and photographic technique, read it, and then tell me what sort of pictures you want to take.” But I know this isn’t the answer they want. So my answer more usually consists of “what’s your budget” etc. Either that, or on seeing my photos, people say “oh, you take great pictures, you must have a really good camera”. Well, it’s true, I do have a pretty good camera, but that’s not the point. Reminds me of an old Jasper Carrott sketch called Virgin Voter when he talks a lot of double-entendres about green 18-year-olds and their first experience of voting, the upshot of which is “It’s not the size of your cross that counts, it’s where you put it!” 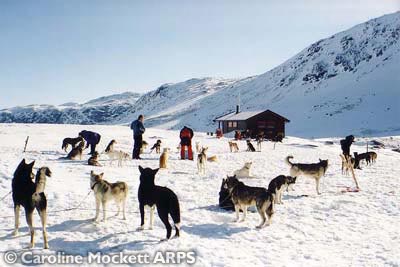 You can take great pictures with a £20 fully-manual Praktika SLR if you know what you’re doing. That’s the “luxury” piece of kit (acquired second-hand from Jessops) I took with me on my Lapland Husky Safari back in 2003. Follow the link for some of the results. I knew I wanted a robust, reliable SLR (and at this point, digital wasn’t really an option for me anyway) and I didn’t want to take my “best” film camera for fear of getting it dropped in the snow or eaten by Huskies. Hence the purchase of the Praktika MTL5B. It cost me another twenty quid for a 35-95mm Auto Rosley (who??) zoom lens.

Just after I bought it, we had some snow in the UK, so I was able to go out and play in similar conditions and make sure I knew how much compensate for the white of the snow. I think I ran it at least ½-stop under all the time, and that seemed to work fine. So even for quite extreme conditions, you don’t always need the top gear to do it justice. It’s only when you want to do something pretty specialised that you start to hit the limits of your equipment, and more probably, your own abilities! I’m hoping to upgrade to a Canon EOS20D or perhaps 30D eventually which will give me better shooting/writing burst speed, plus ISO3200 equivalence; and also a pro-spec 100-400mm EF zoom with Image Stabilization, both for those times that it really is as black as a coal-hole but you still need to take pictures. It would be great for more gig photography as well as dingy winter trips to the rugby. 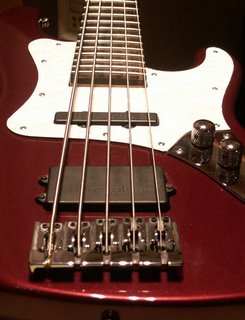 And of course, it’s not just cameras. When I first started to teach myself to play bass guitar, I bought a cheap and cheerful 4-string model to see if I would get on OK with it. As I improved, I started getting frustrated. A lot of songs I like to noodle along with seem to be in the key of D. And a 4-string bass only goes down to E, so if I wanted to play them easily, I either had to drop-tune the E do D (a pain in the butt) or get a 5-string bass with a low B. I managed with the drop-tuning for a few months and then bit the bullet, getting a rather nice hand-made bass from a friend who was selling it. Life has been easier since – except when I try and play anything in flat keys (a nightmare for any string player, we prefer sharps any day!). But that’s just because I’m trying to learn harder pieces!

Anyway, I’ve rabbited on quite long enough, I’ll leave you with a picture of my lovely Iceni Funkmeister – looks like a 5-string Fender Precision, and has a custom purple paint job, which looks rather more red in this photo than it should.

Envy is a terrible thing!

I’ve had my trusty Canon EOS300D digi-SLR since Feb 2004, and have used it for capturing countless pictures which I’m extremely pleased with. The vast majority of the images on my photographic portfolio have been taken with it, so much so that I haven’t picked up my Canon EOS50E film body since going digital. In the main, I’ve had no complaints at all about the camera, and in the age when whatever you buy is obsolete before you get the credit card bill, it’s been an excellent tool to get to grips with the peculiarities of digital, as opposed to film.

However, in the last few months, particularly at some of the rugby games I’ve photographed, I’ve noticed I’m beginning to hit the limits of its capablilities. There have been times when I’ve been following the action, only to find that the vital try-scoring moment has passed by because the camera’s buffer was full and still writing to the card. It takes 10 shots in 30 seconds, roughly – the first 4 in quick succession and then you have to wait for subsequent frames to write to the card (it’s definitely the camera, I tried a 100x CF card and it made no difference!)

Similarly, in the depths of winter, when it’s cold and sometimes pretty dim by 5pm when some games wrap up, it can be pretty difficult to get enough photons onto the sensor – its just too dark, even with the floodlights on and the ISO setting cranked right up to its maximum of 1600. This can lead to some interesting “movement blur” type shots, which is all well and good from an arty perspective , but useless if you actually want to freeze the action.

Photographing games in the rain can be fun, and not just for the sight of 30 beefy blokes rolling around in the mud! I have a Cameramac for the body and Sigma 135-400mm lens which I use at the rugby – basically it’s a waterproof “cloak” which slips over the hardware while still allowing access to the lens, top plate controls and LCD on the rear. I remember one match where it was pelting with rain, but even though I ended up soaked below the knees (my Goretex didn’t stretch down to my ankles!), the camera and lens remained pretty dry.

Anyway, I digress. The point of this post was to comment that, having seen my dad’s new Canon EOS20D this weekend, I’m seriously thinking about upgrading to a 20D or probably 30D (which now supercedes the 20D) in the near future. First catch a spare 800-odd quid. Maybe I should take my bass out and do a spot of busking on the Underground?

I’ve been away for a few days, visiting a friend who now lives in Barcelona, lucky her.

It was a nice break for four days (apart from having to get up at a ridiculous time of the morning to get to Stansted for the flight), and what with going to the excellent @media conference, it means I’ve had about a week out of the office; lovely! 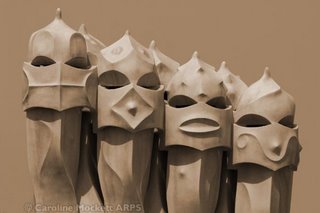 If you would like to see a selection of my photos, you can visit my Flickr stream for June.