Today I met Tony while I was at the Billericay Christmas Fair in the town. He is the Squire of the Mayflower Morris Men who were performing at the event. I managed to catch him before their first set and had a bit of time to chat. He has been involved with Morris dancing for 27 years. He showed me all the mementos of his Morris career pinned to his hat. One was made from the hair from a horse fetlock – given to him by his daughter, as he used to work with horses. Thanks for taking a few moments to talk, Tony. Ross was the second stranger I met at the Bikes & Barges event in Maldon this afternoon. He was playing bass with his tribute band The Doll Set Tones, entertaining folks on the quayside with a couple of catchy sets. I made a picture as he was playing – his colourful sunglasses immediately caught my attention. But that image wasn’t great, and at that point, I hadn’t spoken to him, so it was just a candid portrait. Sometime later, I was wandering around making images of the bikes on show and Ross walked towards me and the two friends I was with. I was just about to grab the chance and ask if he would mind me taking his picture, when he suddenly recognised my two companions whom he’s know for about 15 years but hadn’t seen for ages! So of course we got chatting. He started out as an apprentice motorbike mechanic working for my friend Simon, but left a few years ago. The modest rock and roll lifestyle he leads clearly wasn’t sufficient for his wife, who was apparently at a Robbie Williams gig today, rather than listening to hubby play! He also breeds cats as a hobby – Simon and Sue have one of his (now grown) kittens, Sox. It’s a small world really, and although Ross was a stranger to me, he was an old friend to my mates. Great to meet you, Ross. This morning I went to Ingatestone Station to photograph a steam special which was passing through – the lovely Tornado. There were plenty of other steam heads lurking on the platform – I happened to stand next to Brian and we got chatting while waiting for the train to arrive. He has been chasing steam trains since he was a little lad, and had his first train set when he was 8 – a Hornby Dublo set which he still has (much like my Dad’s). His favourite engine is Sir Nigel Gresley, mainly because he has very fond memories of riding behind it nearly 25 years ago on the last railtour he did with his 10 year old son before he died. Today, his wife was keeping him updated of the train’s running times by checking the website at home and sending him text messages. He said he preferred Tornado in its new Blue livery rather than the previous BR Green. Thanks for being my 28th Stranger, Brian, it was great to meet you. 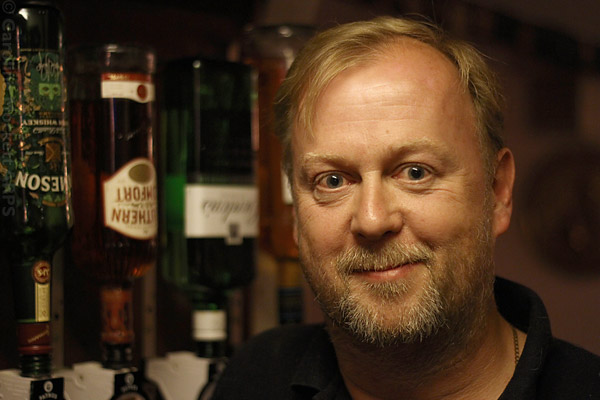 After photo club, it is customary for a few of us to head to the local pub for some extra socialising. This evening Gary was the barman. His daughter works there regularly, but he was standing in for her tonight as she was on holiday. As well as pulling our pints, Gary was happy to chat. He knows the photography bug – from the perspective that he’s a “photography widow” – his wife is nuts about taking pictures. Apparently he has to buy her expensive camera gear and then ends up carrying it for her when she’s on a shoot! I asked if he was ever tempted to take some shots himself, but apparently not. Maybe one day? Thanks for pulling a good pint and taking time to talk, Gary!